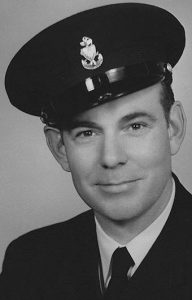 Ralph M. Fowler of Burlington, passed away on Friday, Aug. 4, at the Hospice Home after several months of failing health. He was 97.

Born in Rocky Mount, he was the son of the late B. Worth Fowler and the late Sanatha Stevens Fowler and was married for 68 years to Myrtle W. Fowler, who passed away in 2009.

Mr. Fowler was a World War II veteran with the U.S. Coast Guard and served more than 23 years before retiring as a Senior Chief.

He was of the Presbyterian faith. Ralph was a loving husband, father and grandfather.

He was preceded in death by his wife; parents; and three siblings, Edith Baker, Bion Fowler and Edwin Fowler.

Family planned to receive friends from 1 to 1:45 p.m., prior to the service, at the funeral home, and at other times at the home of the son, Arnold.

In lieu of flowers, memorials may be made to Hospice and Palliative care of Alamance-Caswell, 914 Chapel Hill Rd., Burlington, NC 27215.