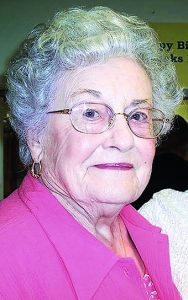 Willie Hardee Carter of Longs passed away Saturday, Dec. 9, at the Loris Rehab and Nursing Center. He was 92.

Mrs. Carter was born in Horry County, a daughter of the late William Hardee and the late Isla Lee Hardee Matthews. She was retired from Santee Cooper and was a devoted member of Living Water Baptist Church.

In addition to her parents, Mrs. Carter was predeceased by her husband of 68 years, J. Robert Carter, Jr.; her stepfather, Robert Matthews; and two sisters, Ruby Hardee and Opal Allen.