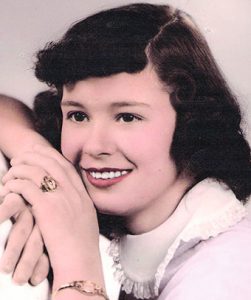 Phyllis Ann Holmes Hendrix of Salisbury passed away from a sudden illness on Monday, Feb. 19, at Novant Health Rowan Medical Center following a five year battle with Alzheimer’s. She was 79.

Phyllis was born March 21, 1938 in Loris, a daughter of the late Rosenell Cox Holmes and Willie Isaac Holmes. She was a graduate of Loris High School and worked for the Salisbury Post as a switchboard operator until her retirement in 2000.

Mrs. Hendrix was a member of Christ United Methodist Church and in her younger years she was a member of the Pilot Club of Salisbury. Phyllis was member of The Women’s Auxiliary of the Harold B. Jarrett Legion Post. She enjoyed gardening, fishing, cooking and especially loved her precious time with her grandchildren.

Preceding her in death in addition to her parents was a son, Charlie Frank Hendrix, Jr. and daughter Brenda Walton Osborne; brother Timmy Holmes; sisters Betty Gore and Lucille Moroff.

Visitation was planned from 6 to 8 p.m. Thursday, Feb. 22 at Summersett Funeral Home, Salisbury. At other times the family will be at the home of the daughter Beth Davis.

Her funeral service was planned for noon Friday, Feb. 23 at Christ United Methodist Church in Salisbury, conducted by Rev. Jill Smith with entombment to follow at Rowan Memorial Park Mausoleum.

Summersett Funeral Home is serving the Hendrix family. Online condolences may be made here.