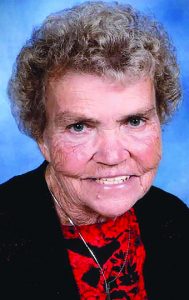 Agnes Hinson McPherson of Clarendon died Saturday, Feb. 24, in her home. She was 84.

Born in Columbus County, she was the daughter of the late Alvie Hinson and Eva McPherson Hinson. She was the widow of Joseph Cecil McPherson.

In addition to her parents and husband she was preceded in death by one daughter, Dolores Godwin; and one sister, Ruth McPherson.