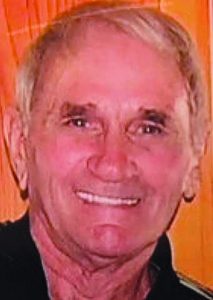 Born Aug. 9, 1939 in Fair Bluff, he was the son of George Owen Edwards and Miriam Kellihan Edwards.

Johnny B. was a graduate of Fair Bluff High School and Pembroke State University. He was employed as a teacher and coach, retiring after sixteen years from the Columbus County School System.  Johnny B. was also a devoted member of the Fair Bluff Baptist Church in Fair Bluff.

Johnny B. will be remembered as a loving father, grandfather, and friend.  He especially enjoyed spending time with his grandchildren including attending many athletic games, church musicals, and dance recitals.  He loved the outdoors, especially Lumber River.  He shared many happy times with his “brothers” from Fair Bluff, hunting, boating, camping, playing cards, and of course, eating.  In his earlier days, he loved playing golf and shagging with his friends, including, Vivian, the mother of his two children, who was still a supportive presence in his life until the very end.

Johnny B. was predeceased by his parents, George Owen Edwards and Miriam Kellihan Edwards; a brother, Fred Eugene Edwards; and a niece, Amy Rogers Jordan.

Funeral services were planned for 2 p.m. on Saturday, March 24, at Fair Bluff Baptist Church in Fair Bluff, burial following at Powell Cemetery.  There will be no visitation.