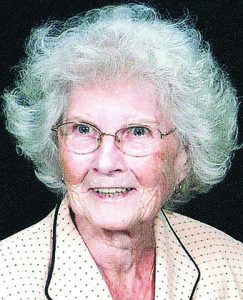 Born Jan. 5, 1927 in Columbus County, she was the daughter of the late Nathan Pink McPherson and Sally Jane Garrell McPherson and the widow of J.W. Spivey.

In addition to her parents and husband, she was predeceased by one grandchild, Farah Cox; three sisters, and three brothers.

Visitation was planned for the  one hour preceding the service in the church.