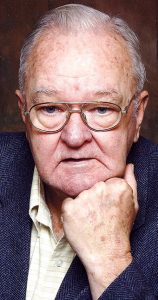 Samuel Willis Medlock of Loris passed away Saturday, June 2, in Lexington, South Carolina at the Agape Hospice House. He was 84.

Mr. Medlock was born May 9, 1934, in Barnesville, Georgia, son of the late John Kenneth Medlock and Ethel Medlock. Sam was the youngest of five, joined the Army, served in the Air Force, then served 40 years in the CIA, earning the highest honor in the CIA, the Career Intelligence Medal.

His family, who honors his service to our country and his unremitting loyalty, love, and commitment, includes his late wife, Barbara Graham Medlock; his loving daughter, Kimberly Medlock-Ferguson of Onancock, Virginia; his two grandsons Samuel and Jackson Ferguson; surviving sister, Marion Shealy; his loving companion, Janet Woods, whose daughter, Kayse (Ted) and son, Jeff (Jodi) were like his own, as well as Janet’s grandchildren; two stepsons Jerry Medlock and Scott Spivey (Donna), and three step granddaughters. His many nieces and nephews all held special places in his heart, including his niece, Julia Marie Hess, who was by his side along with his daughter, Kim, until the moment he left his broken body to take in his new, perfect one and to spend eternity with the Lord.

He was predeceased by his sisters, Virginia Mortimer, Julia Farnsworth, Ethel Gray,

Flowers will be accepted or memorials can be sent to Crescent Hill Baptist Church Food Pantry, 2659 Two Notch Rd, Columbia, SC 29204, or to the charity of one’s choice.

Visitation was planned from 5 to 7 p.m. Friday, June 8, at Hardwick Funeral Home in Loris.