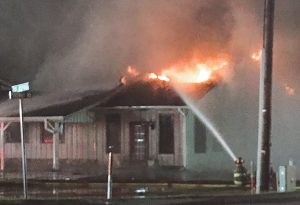 Flames break through the roof on the north end of Dale’s Seafood in Tabor City early Friday. (Jenn Boyd, TLT)

Tommy Gore, an employee at McDonald’s across the highway from the seafood restaurant, provided video of the blaze.

Flames continued to savage the wood structure more than an hour after the 3:50 a.m. alarm. Departments from Columbus and Horry counties answered the mutual aid call, but there was no stopping the flames before the loss was beyond repair. An aerial truck from Loris Fire Department were pumping water from above. Roseland and Williams Township fire departments also responded.

Fire apparently began in the kitchen on the south end of the building, and spread throughout the structure, flames erupting through the roof on the north end as firefighters dumped tens of thousands of gallons of water on the blaze.

Police were detouring traffic on U.S. 701 Bypass away from the area directly in front of the restaurant, from Complex Street to the south, to Pireway Road, and back to U.S. 701 Bypass.

The roof at Dale’s Seafood is gone. (Jenn Boyd, TLT)

Owned by Sue Gore Tyson and Rusty Tyson, Dale’s has been Tabor City’s biggest and busiest restaurant for decades. The location on U.S. 701 Bypass at Pireway Road opened in 1985. Sue’s father, Dale Gore, established his first store in Tabor City in 1981, on Wall Street, where Brie’s Child Care is now located.

Sue, in a 2005 interview, said the restaurant serves as many as 900 people on Saturday nights during oyster season, nearly as many on Fridays.