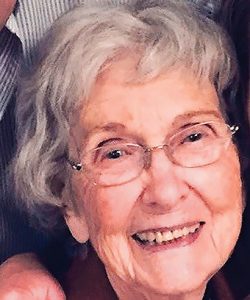 She was born on Nov. 15, 1919 and grew up in Great Falls, South Carolina, where in high school she played on the girls’ basketball team that won the SC State Championship.

She attended Medical College of SC Nursing school in Charleston. She was an excellent nurse, dedicated to her profession, who practiced in Conway, with Dr. Archie Sasser. Later, when the family moved to Raleigh, she became the nurse at the Methodist Home for Children and the NC School for the Blind.

Immediately after retirement, Melda and Albert moved from Raleigh to Misenheimer, where they lived for a number of years, and then moved to Cross Road Retirement Community in Asheboro.

She was reared in the tradition of the Episcopal Church and then became active in the United Methodist Church and finally became a member of Cross Road Baptist Church in Asheboro.

Her interests centered around helping others.

A private service will be held at a later date.

Pugh Funeral Home is handling arrangements for the family.

Family requests that, instead of flowers, gifts in her memory be given to Columbia International University, 7435 Monticello Rd. Columbia, SC 29203 or to the charity of the donor’s choice.