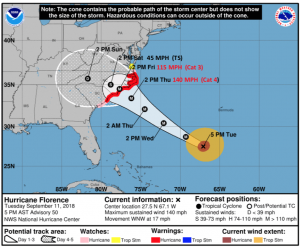 Her impact will be felt much sooner, a 5:30 p.m. update on Major Hurricane Florence issued by the National Weather Service.

Hurricane warnings are in effect for a broad area from Charleston to the Outer Banks, with impacts expected far inland from the Category 4 storm.

Mandatory evacuations were in place at noon Tuesday in coastal areas of Horry County, with American Red Cross shelters open across the county, including at Loris High School. Look for the shelters page here for details.

Forecasters were looking at the possibility of 100 mile per hour winds well inland, with extreme flood threats in a broad area.

Gov. Roy Cooper describe Florence as a “monster hurricane” and urged those in her path to evacuate, those in mobile homes and other less sturdy structures encourage to flee the area, or to shelters. 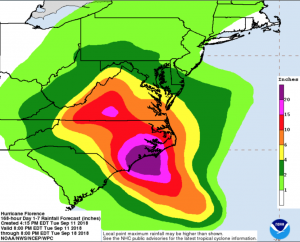 Schools, government offices, and other entities have closed or will close because of Florence. See the closings page here for those details.

American Red Cross shelters will open in five locations across Columbus County at 9 a.m. Wednesday, and Columbus County government offices will be closed for the rest of the week, effective Wednesday, County Manager Mike Stephens said.

Horry County’s Emergency Operations Center is operational, in Columbus County the center will shift to 24-hour operations at 9 a.m. Wednesday.

A state of emergency will exist in Tabor City at noon today as an evacuation order takes effect along the entire coast of South Carolina, including Horry County, all as millions in the southeastern US flee or prepare to hunker down as Hurricane Florence, a category 4 storm, advances towards the Carolinas.

Lane reversals have also been ordered in Horry County, essentially along US 510 moving inland away from Myrtle Beach.

Mayor Royce Harper issued the State of Emerency declaration Tuesday morning, effective at noon, covering all areas within the jurisdiction of the town.

There are no “restrictions or prohibitions” in place now, though curfews and other restrictions could be ordered as the impact of Florence is realized.

In Loris, City Administrator Damon Kempski said an emergency declaration likely won’t come until the impact of the hurricane is known, but that the city is ready.

“We are as prepared as we can possibly be,” Kempski said. “We are at the mercy of the storm. We can do all the preparation on the front end, then it’s just a matter of dealing with what it brings.”

Kempski said the city learned a lot from Hurricane Matthew nearly two years ago, and is better prepared for Florence as a result.

Still, the size and fury of Florence brings worry.

“I’m concerned,” Kempski said. “I’ve got a good team. We’ve got a lot of good people in place. I really, really can’t say enough about the confident I have in them and the abilities they have to accomplish what they neet to accomplish.”

No evacuation orders have been issued for Columbus County, yet, but those is flood prone areas, in mobile homes and other less sturdy structures will need to move quickly if and when that happens.

Shelters in Horry County were set to open today. There has been no decision on opening shelters in Columbus County, no openings are expected today, but could come Wednesday as the track of Florence becomes more clear.

A State of Emergency has been declared in Columbus County in advance of Hurricane Florence.

Other cancellations announced in advance of the hurricane include all Columbus County Court sessions, Wednesday through Friday, and the Columbus County Animal Shelter, closed for the rest of this week.

County Board of Commissioners Chairman Amon McKenzie signed the proclamation effective at 10 a.m. Monday, but it was not publically released until after mid-afternoon.

Here is the text of the proclamation:

I, therefore, proclaim the existence of a State of Emergency in the County of Columbus.

Evacuation. I have determined that, in the best interest of public safety and protection, it is necessary to evacuate the civilian population from certain areas, as deemed necessary, within the County of Columbia. Citizens are free to use any type of transportation, but they are to use only approved evacuation routes in leaving the county. Evacuation is to occur as soon as possible. Further proclamations concerning evacuation will be issued as needed.

Execution of Emergency Plan. All civilians and Emergency Management personnel arc ordered to comply with the Emergency Operation Plan.

Horry County Schools will be closed beginning Tuesday and for the rest of the week in advance of Hurricane Florence, the school district announced Monday.

Columbus County Schools will be closed Wednesday through Friday.

A decision on re-opening next week will be made after the storm passes, and likely announced Sunday.

For the Horry schools the decision came after Gov. Henry McMaster issued an order to evacuate coastal areas and portions of 26 counties in advance of the hurricane.

Officials in both counties continue to monitor Hurricane Florence, which strengthened to a Category 4 storm with devastating potential earlier Monday.

Other updates, including cancellations and schedule changes, will be posted here as events warrant. Look for complete storm coverage in this week’s Tabor-Loris Tribune in print and online.

Declaring “a disaster or emergency is imminent,” Horry County government at noon Monday moved to OPCON 2, its second highest readiness level in the face of the oncoming Hurricane Florence.

Horry County’s Emergency Operations Center (EOC) has been activated, its phone bank operational at 843-915-9150 to assist residents and visitors who have questions, a county news release said.

Evacuation preparations in Horry County are based on projected storm surge, not wind, and plans are in place for mandatory evacuations if ordered by the Governor.

Residents of inland Horry with will be less likely to see mandatory evacuations, but the county has established three evacuations zones:

Residents of mobile homes, campers, and those in flood prone areas are asked to evacuate for all storm, the county news release said.

Residents should be familiar with evacuation routes. In Horry County they include:

When evacuating, it is important to take a road map. Motorists should be aware that law enforcement and the South Carolina National Guard may be posted along evacuation routes to provide assistance. Evacuation routes and maps are available on Horry County’s office website athttp://www.horrycounty.org/Departments/EmergencyManagement.aspx.

Whether required to evacuate or not, at this time citizens should:

Additional hurricane information can be found on Horry County’s website athttp://www.horrycounty.org/Departments/EmergencyManagement/Hurricanes. This link contains information on how to prepare for an emergency, evacuation routes and maps, re-entry information, shelters, etc.

Anxieties are on the rise following a weekend of increasingly dire, though still uncertain forecasts on the future of Hurricane Florence, the center of its forecast path disturbingly near the Tabor-Loris Community for days into Monday morning.

State and local leaders were busy making preparations for the storms impact during the weekend and into this week, governors in the Carolinas declaring states of emergency during the weekend, relaxing transportation and other regulations to allow farmers to more rapidly gather crops in the face of the oncoming storm, and enacting price gouging regulations that prohibit individuals and businesses of unduly profiting as residents make necessary purchase in preparation of, and in the aftermath of the hurricane’s impact later this week.

Forecast paths of the storm vary, with a wide “cone of uncertainty” that could leave the Tabor-Loris Community with a substantial impact from Florence, of little more than rain.

Keeping abreast of forecasts is important, The National Weather Service said, and making sure storm information comes from a reliable source is critical.

“This is a potentially dangerous situation with life-threatening storm surge and wind impacts possible near where the storm eventually tracks,” a NWS bulletins Monday morning said. “The risk of flooding has also increased, especially across NC.”

Public schools in Columbus and Horry were on regular schedules Monday, paying close attention to the storm spokespeople from each of the systems said. Any evacuation and shelter opening order would quickly close schools, with shelters in both Horry and Columbus counties to open in public schools, likely including South Columbus, and Loris high schools.

Emergency managers across both states were encouraging people to finish making preparations for the storm, with supplies enough for several days without access to stores or electric power.