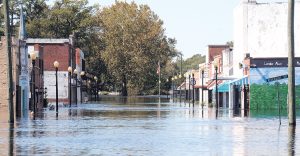 Troops were also deployed to shut down entrances from South Carolina on U.S. 701 and NC 905, but the major entrance at Tabor City remained open late Tuesday evening and a decision to seal the border, or not, was pending, Town Manager Al Leonard said.

Leonard said he discussed the matter with Columbus County Manager Mike Stephens, and said closing the border was neither wanted nor needed.

“Tabor City is open, and our friends and neighbors come here to get food, to get gas, to do business,” Leonard said. “Mike said the concern was that people can’t get through the county, but they can. People are coming through that take 410 to 87 and on to Fayetteville with no problems.”

Northern and eastern areas in Columbus County are facing issues not seen in southern section’s so far, Tatum said, including isolation, food and water being brought in to fire departments in those areas by helicopter.

Fire/Rescue stations in Acme-Delco, Bolton, White Marsh, and Buckhead have received supplies by air in the past two days, Tatum said. Residents unable to find provisions should visit their local fire departments in those areas for water and military MRE’s (Meals Ready to Eat) prepackaged food, Tatum said.

Some major highways and secondary roads in Columbus County remained closed by weather impacts and flooding, the North Carolina Department of Transportation reported, including sections of US 74-76 east and west of Whiteville and eastbound US 74 at the Robeson County line at Boardman. Information on road closings can be found at tims.ncdot.gov. 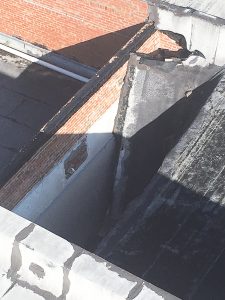 City Hall in Loris is closed after a roof collapse during heavy rains as remnants of Florence moved through the area Sunday, City Clerk/Treasurer Kenya Wright said.

“We have several crews coming in to assess the damage and help us make the decision as to where we go from here and how to move forward,” Wright said. “City offices are in the process of being relocated to the public safety building and will be up and operational on Thursday at 8 a.m.”

“The water’s higher, still climbing, but it’s slowed down rising as quick as it was,” Fair Bluff Mayor Billy Hammond said just after 6:30 p.m. Tuesday.

Fears that flood waters would greatly surpass Hurricane Matthew 23 months ago and invade the relocated Town Hall, and a new Town Hall under construction and attached to the former bank building that now houses city government, were easing slightly, Hammond said.

As river water crept towards what will be the front door of the new town hall, stacks of brick needed to finish up exterior work stood waiting.

Town Hall today will transition to a Visitor Center once the new facility is open, Hammond said.

But water continued creeping closer Tuesday, as Duke Power crews cut power to areas that have flooded or will soon, Hammond said.

When waters cease rising in Fair Bluff, they will keep rising downstream in Nichols, another community devastated by Hurricane Matthew and bracing for the onslaught they expect from the rains brought by Florence.

Nearly all of that town’s residents have evacuates, but Pine Street resident Arista Snipes stayed, refusing shelter and sweltering.

“The Red Cross has two spaces at the local shelter but we have a dog and they aren’t dog friendly,” Snipes said. “It wasn’t hot during Hurricane Mathew like it is now, so we are praying the flooding won’t be as bad.

“There is water across Highway 9, on Pine Street and on the road in-front of the old Pace Pharmacy. They’ve also barricaded the bridge coming into Nichols.”

Southeastern Community College will be closed through at least Saturday.

Decisions on when classes will resume are pending for each of the school systems and SCC.

Trash pickup in Columbus County will resume Thursday for roads that are accessible, a county emergency services news release said. Those who must leave additional trash in bags may leave them beside their can, and Waste Industries personnel will pick that up.

Convenience sites across the county are not accessible at this time.

“I don’t know if we can come back from this,” Fair Bluff Mayor Billy Hammon said as water from the Lumber River creeped closer to City Hall and staff began evacuating files and equipment from the facility occupied after Hurricane Matthew claimed the old City Hall in 2016.

Forecasts that Florence’ water might exceed that of Matthew were looking more possible, though not yet assured, Hammond said. Evacuating city hall and the police department was done to be cautious, he said.

Still, the water was raising to levels to rival that of Matthew. Fair Bluff Fire Rescue Assistant Chief Ken Elliott, monitoring river levels in Lumberton flowing towards Fair Bluff, said water in Lumberton seemed to have crested Monday evening at 22.2 feet, somewhat below the level forecasters had feared.

A National Weather Service summary said the gage on the Lumber River topped out at 24 feet Saturday, but that based on observations it crested at 24.7 feet Monday night and will slowly fall, still remaining in the major flood stage for more than the next week.

Elliott said the Lumber will likely crest in Fair Bluff later Tuesday, its peak level still uncertain. Impacts in Nichols, downstream from Fair Bluff, are expected to be similar, but delayed.

Fair Bluff residents Brenda Rogers and Sabrina Washington walked down Main Street to the barricade to see the flooding of the downtown business district first hand.

“Here we go again,” Rogers said. “We haven’t got over it from two years ago.”

Rogers said her home off of Main Street was flooded by Matthew, and that she’s since moved to higher ground. 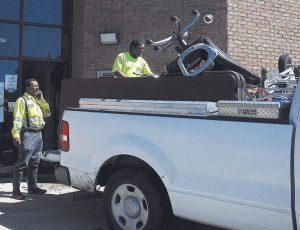 Hammond, reliving the nightmare that was Matthew, had been optimistic earlier because the river level, before Florence, had been exceptionally low.

“I don’t know what to say,” Hammond said. “I never wanted to see this again.”

Fair Bluff’s main business district was already vacant. The owner of the town’s Japanese restaurant, the only business in those blocks to reopen after Matthew, has been sidelined for about a month for a medical issue.

Rising water on the Waccamaw River and tributaries was forcing evacuations in southeastern Columbus County and well into Horry County on Tuesday, water overrunning SC 9 and locations in and near Conway.

Already at major flood level at Conway measuring 15.3 feet, the Waccamaw will continue to rise, cresting a week to ten days from now, and may “exceed levels from Hurricanes Matthew and Floyd by around 3 feet,” the NWS said.

By Saturday the Waccamaw River is expected to Crest at Longs at about 25 feet, the NWS said.

Road closings were growing in both counties, one major closing in the Tabor-Loris Community on NC 410 at SC 9 Bypass, where a barricade and SC Highway Patrol Troopers Tuesday made sure no one got close.

NC 904 at Fair Bluff was closed at the Lumber River in Fair Bluff, swamped by flood waters.

An open house at Lake Waccamaw for NC Department of Transportation officials to discuss plans for US 74-76, scheduled for Sept. 25, has been cancelled and will be rescheduled later, another casualty of Florence, the DOT said.

Water levels of the Lumber River were continuing to rise after 10 a.m., Hammond said, hours after the expected crest during the overnight hours early Tuesday.

“It’s still coming up,” Hammond said. “It’s about to where Matthew was and rising.”

Hurricane Matthew devastated Fair Bluff 23 months ago, most of its downtown stores and hundreds of homes in the community remain vacant. 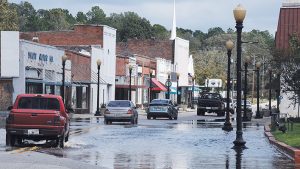 A dusk to dawn curfew has been ordered throughout unincorporated areas of Columbus County, and in several municipalities including Fair Bluff and Chadbourn, as flood waters rise along rivers, recede in other areas slammed by remnants of Hurricane Florence Sunday night. 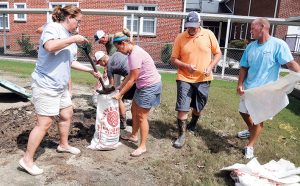 “I don’t think it’s going to be another Matthew, unless it changes quickly,” Hammond said late Monday. “Main Street is covered from Town Hall to the river bridge, and it’s at the white fence behind town hall, but it’s not coming up as quickly as it did with Matthew.”

Torrential rain that caused widespread flooding in central Columbus County, from Tabor City to Whiteville and north overnight Sunday, was less severe to the east and west, sparing Fair Bluff the worst of the parting blows form Florence, Hammond said.

So far, the hurricane was kind as she passed through Fair Bluff.

“It didn’t rain here like it did with Matthew,” Hammond said. “We’ve got minor damage.”

Life-threatening flooding was reported in the Tabor City, Fair Bluff, Lake Waccamaw, Boardman, Riegelwood, Delco and Whiteville areas, with evacuations ordered in each.

Barricades are in place to protect those on the highway, and those who drive around them risk their own lives and place the first responders tasked with rescue efforts at risk.

“There are roads in the county that are failing due to rapid moving flood waters,” the county news release said.

A bridge is washed out near Boggy Hill, the county said.

Other roads currently closed or unsafe to travel include US 74 at the Columbus/Robeson line, US 74/76 in eastern sections of Columbus County, Dock Road, Old Lumberton Road, NC 214 in Hallsboro, NC 87 at NC 11, US 74 West at Chauncey Town, US 74 East at Union Valley.

All Columbus County officers are closed until further notices.

Loris City Hall is closed until further notice because of a roof collapse their during Sunday night’s torrential rain.

Columbus County Schools are closed at least through Wednesday, likely for days longer with reports of damage at some schools including flooding at Hallsboro Artesia Middle School.

Horry County Schools will also be closed at least through Wednesday, in large part because of flooding projections on the Waccamaw River and in other areas extending into next week.

All 240 and 246-day Horry County School employees are to report as normally scheduled Tuesday, if possible, a school district news release said, “but safety must come first.

“We encourage our parents, students, and staff to stay safe and continue to follow the instructions provided by local emergency management officials,” the school district said. “With record amounts of rainfall, residents should be aware that flash flood conditions exist. People should avoid washed out bridges and roads. Do not move or drive around barricades. Follow directions issued by local public safety officials.”