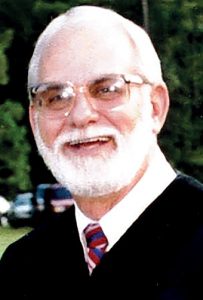 The Lord decided to take his under sheppard, Rev. Ronald Woodrow Ward, home to glory on December 14. He was 74.

Born Jan. 25, 1944 in Loris, he was the son of the late Eugene Vance Ward and the late Thelma Sawyer Ward.

At a very young age, Rev. Ward, as he would come to be known, began delivering papers for Atlantic Publishing Company. He went on to work for many years as a salesman of paper products before starting his own company, Loris Paper & Chemicals.

He was a devout pastor at Mt. Tabor Baptist Church in Georgetown for 38 years, and he was passionate about both mission and disaster relief ministry trips.

Rev. Ward was a dedicated member, and former president and consultant for the Bivocational & Small Church Network. He will be most affectionately remembered as the best pig cooker around and a two time chicken bog champion at the Loris Bog-Off Festival.

In addition to his parents, Reverend Ward was predeceased by one brother, Gene Keith Ward.

Family planned to receive friends from 2 to 4 p.m. Sunday, Dec. 16 at Hardwick Funeral Home in Loris, and again from 1 until 2 p.m. Monday, Dec. 17, at Mt. Tabor Baptist Church in Georgetown.