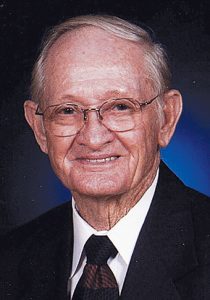 Benjamin “Tilly” Tillman Hughes of Loris passed away on Monday, Jan. 7 at home following an illness. He was 87.

Mr. Hughes was born April 5, 1931 in Loris to the late Jessie Ferd Hughes and the late Augusta Ada Dillard Hughes.

Mr. Hughes served his country with honor and dignity in the U.S. Air Force for 20 years and was a longtime member of Mt. Vernon Baptist Church where he served as a deacon and taught a men’s Sunday school class.

Upon retiring from the Air Force, Mr. Hughes was an Optician in Loris and Conway.

Survivors include his wife of 53 years, Audrey Hughes of the home; son Eric Ben Hughes of Loris; two brothers, Daniel Hughes of Loris and Andrew Hughes of New Port News, Virginia; two granddaughters, Jessica Kelly Hughes of Longs and Casey Willard and husband Will of Hamlet.

Visitation was planned from 6 to 8 p.m. Wednesday, Jan. 9, at Hardwick Funeral Home.