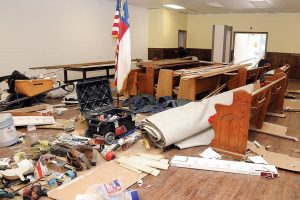 Courtroom renovations incomplete on Thursday, Workers in the photo below put some finishing touches on the judge’s box and witness stand. (Deuce Niven, TLT)

“Therefore due to the concerns in regards to the safety of all, court has been cancelled,” Hill said. “All cases have been continued to March 15, 2019 in Tabor City. 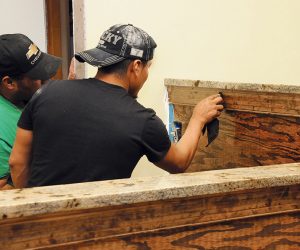 Flooding twice in less than five months prompted town government to order the improvements, ripping up carpet, replacing that with flooring that will be easier to maintain and to restore if flooding hits the court building again, Town Manager Al Leonard said previously.