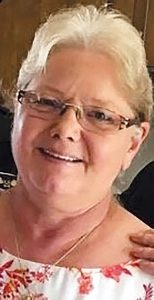 Born Feb. 24, 1958 in Washington, DC, she was the daughter of the late Patrick Anthony Higginbotham, Sr. and Barbara Ann Brenaman and the widow of Carl Jack Synder.

In addition to her parents and husband, she was preceded in death by her biological father, Gene Laverne Self, Sr.

Visitation was planned from 6 to 8 p.m. Saturday, Feb. 16 in Inman Ward Funeral Home of Tabor City.