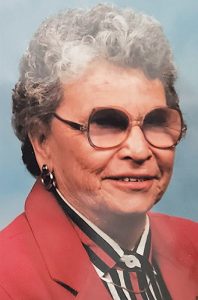 Thelma Juanita Fowler Watts of Tabor City died Wednesday, April 10, in her home. She was 91.

Born Nov. 1, 1927 in Horry County, she was the daughter of the late Raymond Condary Fowler and Minnie L. Fipps Fowler and the widow of Rolan Watts.

In addition to her parents and husband, she was preceded in death by one son, Donny Watts; a grandson, Jeff Watts; one brother, Dennis Fowler; and a sister, Clara Fowler.

Visitation was planned from 6 to 8 p.m. Friday, April 12, in Inman Ward Funeral Home.