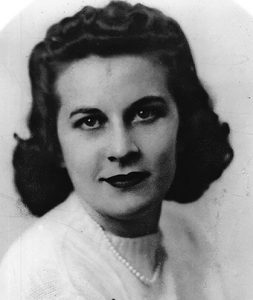 Sarah Louise Powell Townsend Scott of Fair Bluff passed away on Saturday, April 13, at the home of her daughter, Sarah Anne Townsend in Columbia, after a lengthy illness. She was 97.

Mrs. Scott was born in Chadbourn on May 15, 1921 to the late Ruth Wooten Powell and the late Robert Quitman Powell.

In addition to her parents, she was predeceased by her husband Samuel D. Scott of Fair Bluff, NC.

She graduated from Fair Bluff High School and attended the University of South Carolina where she was active in the musical programs.

Sarah was an accomplished musician having started playing the piano at age seven and in absence of the pianist, she played for Fair Bluff Baptist Church at age 12 which delighted all that were in attendance.

She served as pianist and organist at Lake Waccamaw Presbyterian Church for decades.  During this time, the Music Department upgraded with a Hammond Organ given in memory of K. Clyde Council by Emma Cole Council.  Sarah, along with the Worship Committee, selected and supervised the installation of the organ which is still in service at the present time.  She also played for the Loris Presbyterian Church and The Fair Bluff United Methodist Church and entertained with beautiful solos at many receptions and other events in the community.

Sarah was a member of the Loris Music and Literary Club.  Also, she was a member of the Major General Robert Howe Chapter of the DAR in Columbus County, NC being recognized in 2017 as an active fifty year member.  Her cousin, Annie Wooten McAuley of Clarkton, NC was the organizing regent of this DAR Chapter.

The family thanks Heartstrings Hospice of Columbia for their wonderful and caring help during Sarah’s illness and special thanks and praise to Tarzanna Waymyer and Chris Heron for their devotion to Sarah.