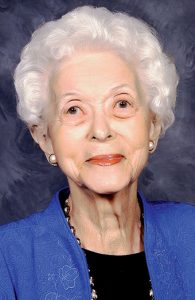 Florene Anderson Stevens of Loris passed away on Tuesday, May 28, following an illness. She was 95.

Mrs. Stevens was born on Jan. 12, 1924 in Rocky Mount, to the late Oscar “Bud” G. Anderson and the late Bessie Suggs Anderson. Mrs. Stevens worked at Loris Hospital and then Loris Drug store as bookkeeper until her retirement and was a longtime member of Cane Branch Baptist Church.

Visitation will be held 6 to 8 p.m. on  Friday, May 31 at Hardwick Funeral Home.

Memorials may be made to Regency Hospice, 600 Garden City Connector, Murrells Inlet, SC 29576.