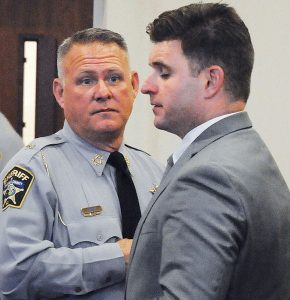 Jody Greene’s election as Columbus County Sheriff is expected to be certified by the Columbus County Board of Elections Thursday, a day after a judge in Raleigh denied a request to stay certification as an election protest moves from the political to the judicial.

Smith’s challenge to Greene’s election last November is among several connected protests that have wound their way from the Columbus County Board of Elections to the State Board of Elections, with mixed results.

State board members earlier this month unanimously overturned a split local board decision that Greene did not meet residency requirements to run for sheriff. Smith’s appeal, with attorneys for protester Nancy Hill and former Sheriff Lewis Hatcher, has been taken to court, her appeal filed in Wake County Superior Court last week.

Columbus County Board of Election members are scheduled to meet at 10 a.m. Thursday and expected to certify Greene’s election, and the results of a mixed drink referendum held in Tabor City as part of last November’s general election.

While never directly challenged, the Tabor City vote was named in some of the protests filed following the election, alleging irregularities in the voting process.