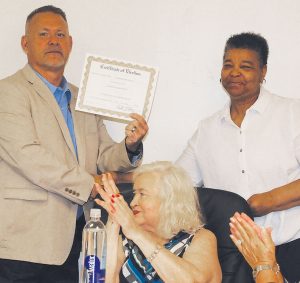 It took the board just 14 minutes to certify the sheriff’s race, a mixed drink referendum for Tabor City, and hear public comment that included an admonishment not to repeat mistakes that delayed Greene’s certification for seven months.

“A lot of people got us here,” Greene said during the public comment period. “I thank my family, supporters, and my staff. They went through as much chaos as I did.”

Though another chapter remains unwritten in this election saga – an appeal of elections protests denied by the State Board of Elections is pending in Wake County Superior Court – Greene said “there are better days ahead.” 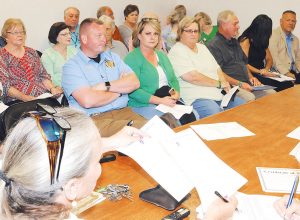 Protests of the election rejected by both the county and state boards involved election day issues and allegations involving improper absentee ballot handling.

Chief Deputy Aaron Herring, during the public comment period, admonished the county board to move forward professionally, and to recognize the impact election issues and board decisions have on those who are elected, and those who serve elected officials.

Sheriff’s employees in the past seven months, Herring said, have lost sleep with worry over the election outcome, and if they would have jobs the next day.

Former county board member Tucker Mack Ward, attending the first meeting since a new board was selected by the state board and Gov. Roy Cooper, said he was pleased with the meeting Wednesday.

“It’s a great comfort to me today to see an awful wrong righted,” Ward said. “And that’s all I have to say.”