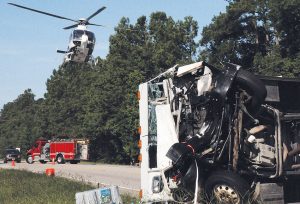 An AirLink helicopter takes off from a crash scene on US 701 in Tabor City Monday morning. (Deuce Niven, TLT)

A safe movement violation has been written for the chip truck driver deemed at fault in Tuesday’s two-vehicle crash on US 701 in Tabor City.

Elizabeth Ann Brown, 26, of Miller Road was traveling north on US 701 Bypass when she attempted to make a left turn into the Dale’s Seafood parking lot, pulling into the path of the gasoline tanker, the report by Tabor City Police Department Lt. Gary Lewis said.

Witness statements at the crash site indicating that Brown had run the red light crossing U.S. 701 were not correct, Maj. Greg Sibbett said.

Look for more on this story in the July 3 Tabor-Loris Tribune in print and online.

A morning crash at one of Tabor City’s busiest intersections shut down a section of U.S. 701 with one vehicle overturned on the highway, an AirLink helicopter touching down on the asphalt nearby.

Gasoline tanker truck driver John McNair of Selma was credited with some excellent driving, steering the badly damaged big-rig down an embankment into the Dale’s Seafood parking lot, the truck stopping just before entering a nearby woodline.

“He did some excellent driving,” Lt. Gary Lewis of the Tabor City Police Department said. 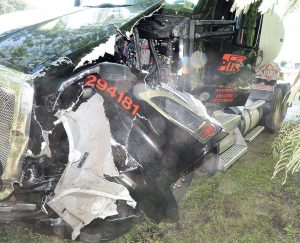 Dispatched from Columbus Regional in Whiteville, the AirLink helicopter took the woman who was at the wheel of the panel truck to Grand Strand Regional Medical Center, a trauma center. A landing zone was set up on the highway by the Tabor City Fire Department. A crowd from McDonald’s watched, several with phones out recording as the rescue unfolded.

Witnesses told police that the panel truck used by a potato chip and snack vendor was travelling west on NC 904 and ran the red light, into the path of McNair’s southbound tanker truck. The impact shattered the fiberglass hood of the big rig, damaging the radiator, oil pan and more. A trail of fluid led from the impact point on the highway to the truck at the edge of the woods.

A crew from HERR, a hazardous materials clean-up company, was dispatched to clean up the fluid.