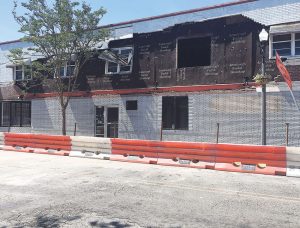 Barriers in front of the former Mystic Motions business in Loris have allowed Main Street to re-open. (Jenn Causey, TLT)

Main Street in downtown Loris was reopened to traffic about noon Tuesday, about 22 hours after the partial building collapse of the former Mystic Motion sent brick and lumber from its façade crashing onto the sidewalk and into the street.

South Carolina Department of Transportation workers and city employees were on site Tuesday morning, placing barricades as that section of downtown resembled a ghost town on a sunny business morning. 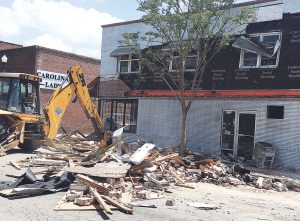 A partial building collapse in downtown Loris has closed Main Street, which is also SC 9 Business.

Brick and wood from the building façade crashed to the sidewalk and pavement at about 1:45 p.m. City workers responded quickly to clean up the street in front of the former Mystic Motions store.

No injuries were reported.

The building reportedly sustained significant roof damage during Hurricane Florence last September, which forced its closing. Contractors have been seen inside making repairs recently, but it was not clear Monday if any repairs had been made to the roof or exterior of the two-story building.