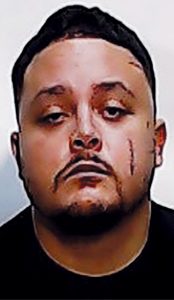 Hunt was hired Jan. 16, 2018 at TCI as a Correctional Officer II, Higgins said. His current annual salary is $35,076 and as of Tuesday he was a TCI employee, Higgins said.

An arrest has been made in an early morning home burglary and assault that left the suspect with multiple stab wounds at the hand of his intended victim.

Hunt was charged on sheriff’s warrants with assault with a deadly weapon with intent to kill, assault inflicting serious bodily injury, and first degree burglary. His bond was set at $100,000 secured.

Hunt is charged with breaking into a house on Lester Watts Road, east of Tabor City, and attacking the 24-year-old homeowner in her bed as she slept, Sheriff Jody Greene said in a news release Monday.

The homeowner was able to reach a knife and fend off her attacker, sending him to the hospital. He was treated at McLeod Loris hospital, then Grand Strand Regional Medical Center in Myrtle Beach. He was apparently released from the hospital Tuesday morning.