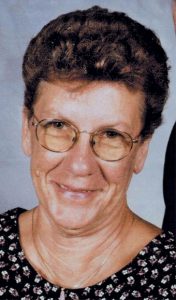 Joanne Goff Grice of Tabor City died Thursday, Jan. 9, in her home. She was 73.

Jesus came by and picked up Joanne today to go home and be with the Lord forever. She gave a big effort to get well but it was not to be. She would much rather be with Jesus than be here on earth.

In 1989 Joanne began work in real estate and soon moved to construction to work with her husband, Davis. On Jan. 1, 2000 Joanne and Davis decided it was time to quit work, go home and rest.

She was a member of Pireway Original Free Will Baptist Church for forty years.

She had a family with a big heart and lots of love for them all. She leaves behind daughter, Nina Matthews and husband Bob of Longs; son, David Clay Grice and wife Darlene of Nakina; son, Brian Grice and wife Wanda of Whiteville; daughter, Sherry Harrelson and husband Terry of Whiteville; and daughter, Tracie Grice of Dillon; sister, Shirley Goff of Tabor City; nine grandchildren and twenty one great grandchildren.

Joanne was preceded in death by her parents, Ausbon Goff and Janie Lee Goff Burton; a nineteen year old son, Bryan Gaskins, who passed away December 25; and her loving husband of fifty eight years, Davis Grice, who passed away June 17. They were two peas in a pod.