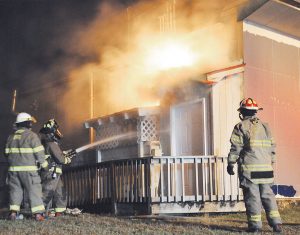 Firefighters from Tabor City, Roseland, Williams Township, Fair Bluff and Loris responded to the commercial alarm, but only Tabor City and Roseland had trucks on the scene before the blaze was contained.

Fire appeared to originate from high in the rest room, with an electrical problem at or near a light fixture the suspected source, Fowler said.

There is no door connecting the rest room to the main building, known to many as the former BP service station on the corner of East 5th Street and Pireway Road. Firefighters cut a hole in an exterior wall that already had signs of unrelated damage to make entry to the main building, which was filled with smoke.

Look for more on this story in the next Tabor-Loris Tribune, in print and online.