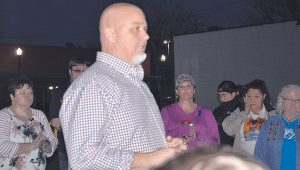 Thousands of miles removed from a desperate search for Gannon Stauch, his grandmother Loronda Bullard joined more than 100 people in a prayer vigil in downtown Loris Wednesday evening.

Bullard’s daughter, Landon Hiott, has been in the Colorado Springs, Colorado area for more than a week now, arriving as soon as she could after son was reported missing on Jan. 27.

Family and friends, most from Harvest Baptist Church and Crossway Baptist Church, heard Crossway Pastor Tommy Shelley pray with Gannon’s loved ones who were present, and pray for the 11 year-old boy’s safe return.

Shelley said he has given support to Gannon’s grandparents, Mack and Loronda Bullard. Mack Bullard, Shelley said, described the pre-teen as “my buddy, my hero.”

“We just pray You will bring Gannon home to us,” Shelley prayed.

Timmy and Melissa Todd, who helped organize the vigil, said they know the grandparents well because Mack Bullard is a frequent customer at the NAPA store Timmy Todd manages in Loris.

“We know his grandparents and felt in our hearts it was the right thing to do,” Melissa Todd said. “Loris is a tight-knit community and we all try to help one-another.”

Because blue is Gannon’s favorite color, many wore blue to the vigil in homage to the boy.

Kirby said the dive team effort follows “tips and leads” in the case, but she would not elaborate.

Lorson Ranch is the El Paso County neighborhood where Gannon was living with his father, Albert Stauch, and step-mother Letecia “Tecia” Stauch.

Letecia Stauch reported Gannon missing in the afternoon of Jan. 27, telling authorities that her step-son had gone to visit with a friend in the neighborhood, though she did not know which friend or which home.

That timeline has been called into question by video from a neighbor’s home security system, which seems to show Letecia Stauch leaving the home with Gannon that morning, and returning four hours later without him.

You may view that video here.

Law enforcement has been tight lipped about the investigation, which they have not described as criminal, though crime scene teams at the Stauch home collected numerous items of evidence, multiple local news agencies have reported.

Fourth Judicial District Attorney Dan May was in the Stauch home in the Lorson Ranch neighborhood near Colorado Springs for about an hour Wednesday afternoon, multiple news outlets including The Gazette of Colorado Springs reported.

A YouTube video with Gannon’s parents and younger sister Laina, released Wednesday, showed both parents expressing their appreciation for the support and prayers they have received. View that video here.

Look for updates here as events warrant, and more on this story in the next Tabor-Loris Tribune in print and online. – Additional reporting by Deuce Niven