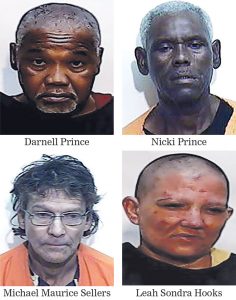 All four appeared to be living in the home, though Sellers also had an FM Cartrette Road address, Hooks showed a residence on Cherry Grove Road, Cerro Gordo. All four were present at the home when investigators arrived.

Investigators “located and seized” narcotics with a street value of more than $56,000 and more, including:

All four were charged with felony counts of possession with intent to manufacture, sell and deliver schedule 2 and schedule 6 controlled substances; felony heroin possession; felony cocaine trafficking; and misdemeanor possession of Teflon-coated bullets.

Nicki and Darnell Prince were each also charged with felony counts of maintaining a dwelling to keep and sell a controlled substance. Their bonds were each set at $135,000.

Greene said he appreciates the cooperation of several people he spoke with at the Prince house, and encourages citizens to continue making contact with the Sheriff’s Office when they witness illegal activity.