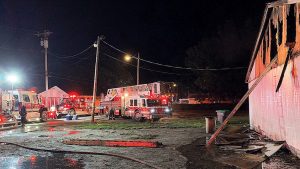 Four tenants of a Maple Street apartment complex were displaced by a fire that involved three units late Thursday.

One apartment was heavily damaged in the blaze reported at about 10 p.m., “two apartments received minor damage,” Rudelitch said.

Horry County Fire Rescue and Tabor City Fire Department also responded to the fire, Rudelitch said, adding that the cause of the fire was not determined.