Police have sealed off an area around Walnut and Triangle streets in Loris. (Jenn Causey, TLT)

After barricading himself in his home since about noon, the man surrendered to police and will be taken for a mental health evaluation, Buley said.

No one was hurt, and police have reopened streets including Walnut and Triangle streets, the chief said.

A heavy police presence was in place in east Loris Tuesday afternoon involving a man with a gun in his home, Police Chief Gary Buley said.

“An individual has barricaded himself in his home with a gun,” Buley said.

Police blocked off Walnut Street and Triangle Street behind The Grind restaurant.

Loris police, the Horry County Police Department and its SWAT Team, and Horry County Fire Rescue paramedics were also on the scene. 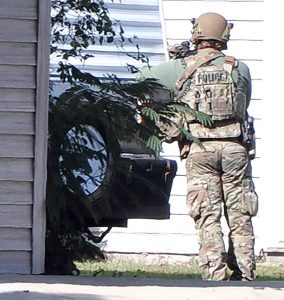 Residents reported hearing sirens at noon, and said most of the activity was on Triangle Street.

Look for additional information here, as it becomes available, and in the next Tabor-Loris Tribune in print and online.