Election day is off to a generally good start in Columbus and Horry counties, county officials and others at the polls were reporting late this morning.

There were lines at some precincts, little to no wait at others, at various times during the morning. A line wrapped around the building at Loris Elementary School, the East Loris polling site, an hour after the polls opened at 7 a.m.

At Daisy Elementary Samantha Norris said it took her about an hour to cast her ballot.

Voters said the wait was worth it.

“Everyone is discouraged and you can’t give up,” LaNesha Grate said of her determination to vote. “You need to be able to say you ‘gave it a try.’ That is why I stood in line.”

“It’s my right as an American to vote and I want to execute my right,” Kim Gerald said. “That’s why it is important to vote.” 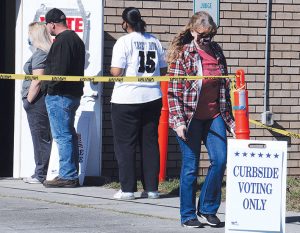 Early voting ended Saturday in Columbus County, including at the Tabor City District Court building where there was a short line at mid-morning. (Deuce Niven, TLT)

Columbus County Elections Director Carla Strickland said there were no significant voting problems by mid-morning Tuesday, while a few precincts in Horry County encountered some issues, including at Pee Dee Elementary School where ballots were not on-hand until about 7:30 a.m., half an hour after voting was to begin, WMBF TV reported.

Look for reporting on local elections here tonight and in Wednesday’s Tabor-Loris Tribune in print and online. – Additional reporting by Jenn Causey