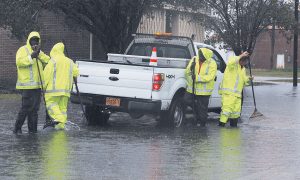 Minor flooding had begun in downtown Tabor City early Thursday afternoon with a flash flood watch in effect for a large swath of the Carolinas through late tonight.

“Additional rainfall amounts of 3 to 5 inches are expected through today, before moving offshore late tonight,” a National Weather Service bulletin said. “Torrential rain will cause a hydroplane danger. Streams, ditches and culverts will become dangerous, water will be running more swiftly.

“Some roadways could become briefly impassable due to excessive water. Visibility will be reduced to less than a quarter mile in downpours, making driving a hazard, especially with school bus activities during the afternoon when rain may become heaviest.”

“Cars were coming through the water, not slowing down, and the water was just rushing up,” Fire Chief Jeff Fowler. 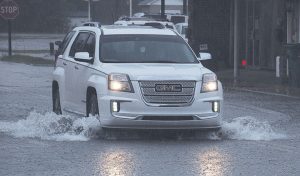 Water threatened the Tabor City Court Building, and the nearby fire station, but apparently did not get inside, Fowler said. Public Works crew members were using rakes and shovels to make sure storm drains were clear of debris, efforts that appeared to pay off.

Fowler said water was rising in other areas of town, including Stake and Willoughby roads. National Weather Service predictions of much more rain Thursday were not welcome news for the fire chief.