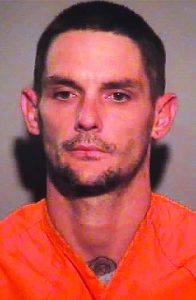 Richard Dale Gore was clearly not expecting the call from a North Myrtle Beach police officer who had found an Andrews man behind the wheel of Gore’s pick-up truck.

That call, Wednesday evening, forced Gore to call police in Tabor City to report the apparent theft of the 2000 Dodge Dakota he had left at a local auto repair shop eight days earlier, a report by Lt. Robert Mumblow of the TCPD said.

Gore called Perritte’s Garage, where the owner said the truck had been placed in an enclosed fence behind the building, but that it was no longer there, the TCPD report said.

Stopped by a North Myrtle Beach Department of Public Safety Officer, Phillip Byron Bledsoe, 35, of Alligator Road in Andrews, was charged with possession of the stolen vehicle and driving with a suspended license and held under bonds totaling $4,600, J. Reuben Long Detention Center records showed.

His Nov. 11 arrest was the third in 2020 for Bledsoe, jail records show. He was charged by Myrtle Beach Police with possession of stolen property on Oct. 6; and by the Horry County Sheriff’s Office with driving under suspension, contempt of court, and failing to appear in court on April 3.

Tabor City Police are continuing their investigation, the report said.