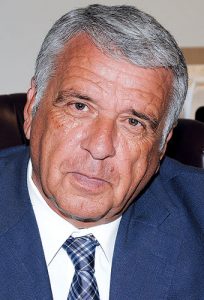 Mike Stephens will not be Columbus County Manager as three new members take their seats in December, tendering his resignation to the outgoing board during its meeting Monday.

Stephens presented a letter of retirement to outgoing member and chairman Edwin Russ just before the commissioners voted to enter into closed session to discuss a personnel issue. He told the board he had no comments on his decision, with his retirement effective Nov. 30.

It was the last regular meeting for commissioners Russ, Trent Burroughs and James Prevatte, all three offering comments on their various tenures in office.

Brent Watts will replace Burroughs in the District 5 board seat in December, Chris Smith will take the District 2 seat Prevatte has held, while Lavern Coleman will follow Russ in the district 1 post.

Watts and Smith won their seat in this month’s general election. Coleman defeated Russ in the GOP primary earlier this year, and held off Democrat Rickie Rouse in the general election to take the seat.

Watts, Smith and Coleman are all Republicans, the party claiming three of the four commissioner’s seats up for grabs this year. Incumbent Buddy Byrd, a Democrat, won re-election over Republican Ray Battle.

Stephens was hired as County Attorney in 2009, was named Interim County Manager in September 2017, and given the more permanent job assignment early in 2018.

He served as both county manager and attorney for several months, until Amanda Prince was hired as county attorney.

A Tabor City native, Stephens is retired from the North Carolina Highway Patrol and was serving as an Assistant District Attorney before accepting the post as county attorney.

At that time, he said he hoped the county post would be his last job. There was, it turned out, at least one more. That one ends Nov. 30.