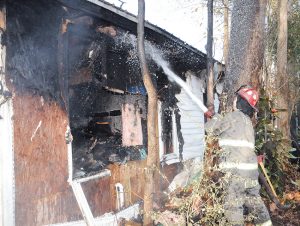 A Tabor City firefighter gets water into a hard to reach area near the roof of a Watering Street home Sunday. (Deuce Niven, TLT)

“It looks like it might have started at the dryer,” Tabor City Fire Chief Jeff Fowler said of fire that damaged a Watering Street home Sunday afternoon.

Fire was visible from the rear of the long, double-wide as fire firefighters responding to the 2:35 p.m. alarm arrived, Fowler said.

Getting to the fire proved a challenge, he said, because of the way the original dwelling had been modified, with rooms and at least two additional roofs added. A blue metal roof is a recent addition, Fowler said.

Firefighters from Fair Bluff,  Roseland and Williams Township also responded with trucks and equipment. Tabor City Emergency Services was on site with an ambulance, the Tabor City Police Department blocking the Watering Street.

A more thorough investigation into the cause of the fire was planned for Monday morning, and will involve the Columbus County Fire Marshal’s office, Fowler said.