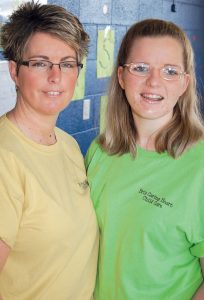 “I don’t know where it came from,” Bri’s Caring Heart Child Care owner Melody Spivey said of the coronavirus infection that prompted her to close three Tabor City facilities into the new year.

Spivey said her decision to shut down was not required by the Columbus County Health Department, but was right for her.

“These children, they are like yours, because you’ve been with them for so many milestones,” Spivey said. “My heart was telling me to close. If something happened, and we could have prevented it, I couldn’t live with myself.”

Spivey said she and her daughter, Brionna, who opened the business nearly a decade ago, have both tested negative for COVID-19, but the virus has infected others at her facilities.

Regardless of the test results, Spivey said she and Brionna are in quarantine for two weeks, until her planned re-opening of the business on Jan. 4, 2021.

Five staff members and two children have tested positive for the coronavirus since Monday, Spivey said.

With community spread of COVID-19 widespread across the state and country, tracing the source of this outbreak is virtually impossible, Spivey said.

A call to the Health Department; ‘I was crying’

A staff member with a history of sinus problems was back in her doctor’s office Monday morning with symptoms not at all unusual for her, Spivey said. Someone in the office suggested a COVID-19 test, “just to be sure,” Spivey said.

That test was positive, the staff member immediately notified Spivey, who knew her next step was to remove everyone from the room that staff member had worked.

“I immediately evacuated that room,” Spivey said. “And I had to call the health department. I was crying.”

Spivey said she was worried for her staff member, worried for the children in her care. A Health Department official, Spivey said, instructed her that her procedures were sufficient to isolate any threat to those in the specific room, and that while those children and staff members should quarantine and be tested, the rest of the day care operation could remain open.

“Businesswise it’s not good for me,” Spivey said of her decision to close. “But it’s the right thing to do. The Lord has truly blessed me. We’ll be fine.”

Bri’s currently serves 112 children at the three locations, from infants to children age 12, including before and after school programs.