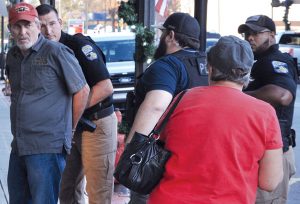 Placed in handcuffs in front of his Main Street business, (from left) Leslie Bryan Smith was in the custody of Officer Bobby Brush, Det. Eric Stevens, and Officer Naim Vaughn. (Jenn Causey, TLT)

A Main Street merchant who is a convicted sex offender was charged by Loris Police Wednesday with criminal solicitation of a minor.

Leslie Bryan Smith, who lives at the rear Smitty’s Things, was taken into custody on the sidewalk in front of the business, arrested at 4:42 p.m. as patrons and others walking the sidewalk appeared shocked by the quick and efficient arrest.

Smith, 63, is accused of offering a 14 year-old boy “items he sold at his business in exchange for sexual favors,” Det. Eric Stevens said in a written summary of the investigation and case law.

Parents of the teen and the boy “filed a complaint” with Loris police Saturday, Stevens said. The boy told police that Smith began soliciting him for sex in August, activities that continued through October.

Smith, the boy told police, said “that he has performed sexual acts with other young boys in the past.”

Smith was interviewed after his arrest, and “a Loris Police Detective obtained a confession,” Stevens said. “Smith admitted to offering sexual favors to the victim and making sexual comments to him.”

If convicted in court, Smith faces up to ten years in prison and/or a fine of up to $5,000.

Smith is listed on the sex offender database maintained by the Horry County Sheriff’s Office as an Adult Tier III offender, convicted of criminal sexual conduct with a minor in January 2016, with male victims who were 8 and 10 years old at the time of the crime.

Smith was also convicted of assault and battery of a high and aggravated nature in January 2013.

Look for updates here as events warrant, and more on the story in the next Tabor-Loris Tribune in print and online. – tribdeuce@tabor-loris.com, tribjenn@tabor-loris.com