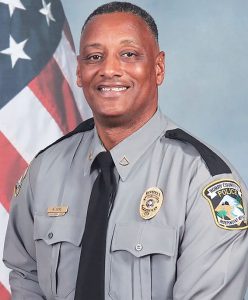 A veteran Horry County Police Department Officer known for his “food and kindness” was killed when he was struck by a vehicle near North Myrtle Beach Tuesday afternoon.

Lance Cpl. Melton “Fox” Gore, 57, was “performing a task outside of his truck near the intersection of Hwy 22 and Hwy 31 when he was hit by a vehicle,” a news release from Horry County government said.

Gore was out of his truck removing debris from a westbound lane of the multi-lane highway when he was struck and killed, HCPD Chief Joseph Hill said during a news briefing Tuesday night.

It was not clear Tuesday if the driver of the Mazda will face charges.

“I’m pretty sure that person did not start off the day thinking they were going to kill a police officer,” Hill said. “Our thoughts and prayers go out to that driver.”

Stopping to clear the highway was completely in character for Gore, Chief Hill said.

“He cared about this community,” Hill said. “Most people may have passed that debris by, swerved around it, but not Fox. He wanted to make sure nobody was hurt by it.”

Also responding to the incident was Horry County Fire Rescue and the North Myrtle Beach Department of Public Safety.

An HCPD environmental officer for more than 20 years, assigned to the West Precinct which includes the Loris and Green Sea areas, Gore was a friend to the community and to those in law enforcement, Loris Police Chief Gary Buley said.

“He’s going to be missed by the community,” Buley said. “He was definitely one of the good ones.”

Gore was known for his cooking talents, too, often preparing meals for officers of the West Precinct.

“Any time I was invited out to the West Precinct and there was food, he was the cook,” Buley said. “It was awesome food.”

“He was a caring person who was known around the County for the delicious      meals that he cooked,” the county news release said. “His food and his kindness brought people together.”

Jenn Causey, a reporter for this newspaper and Loris area native, said she met Gore early in his career at the HCPD.

“When I had a stalker harassing me with calls, for two weeks he walked around the perimeter of my house to ensure grandma and myself were safe,” Causey said. “Great guy. He was my protector. I’m in tears.”

See more on this story in today’s Tabor-Loris Tribune in print and online.