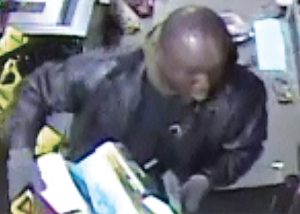 Caught on surveillance video inside the Dollar General at Old Dock, this man is also a suspect in a similar break-in at the Williams Township Dollar General. (Source: CCSO)

One man is believed responsible for break-ins at two Dollar General stores in Columbus County earlier this month, and the Columbus County Sheriff’s Office is asking for help to identify him.

Break-ins were reported at the Dollar General on Dock Road in the Old Dock Community on Jan. 8, and at the Mollie Road store in Williams Township on Jan. 9, a news release from Sheriff Jody Greene said.

Both break-ins were reported after 2 a.m., and in both cases entry was made by breaking glass in a front door. Though wearing different clothing, surveillance images seem to show the same suspect, a black man.

At Old Dock the man was wearing a black hoodie or black hooded jacket, camouflage pants, and black and white shoes. A four-door car outside the store was also noted.

At Williams Township the man was wearing what appears to be a black jacket/coat with a hoodie on underneath with a dark green hood; black pants, with either blue underwear or shorts on underneath; and black and white shoes.

Images indicate the man is either bald or has very short hairs.

Cartons of cigarettes, electronics, and lighters were taken at Old Dock, more cigarettes, sodas, and blunt wraps at Williams Township.

At both locations the man was seen taking items from the stores to an awaiting vehicle multiple times.

Anyone with information, or who may know the man seen in the surveillance videos, should contact the Columbus County Sheriff’s Office at 910-640-6629.

Look for updates on this story as events warrant, and in the next Tabor-Loris Tribune in print and online.