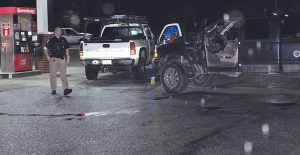 Loris Police Officer Bobby Brush on the scene of Thursday’s shooting at the Speedway in Loris. (Jenn Causey, TLT)

David Gordon Lynn, a Loris area resident, has been identified as the man killed during an alleged “road rage” confrontation that ended outside the Speedway convenience store in Loris Thursday evening.

A preliminary investigation indicates Lynn and another man pulled into the Speedway parking lot, stopping near gas pumps. Lynn allegedly approached the second truck, pulled a knife out, and open a door of the second when a man in that truck shot Lynn, a Loris Police Department report said Thursday night, though it did not name Lynn.

Police have not filed charges against the man who fired the shot, Buley said Friday, with a decision on if charges will be filed not made by the end of the day. It was not clear when that decision will be made.

Look for additional details here as they become available, and the full story in the next Tabor-Loris Tribune in print and online. – Additional reporting by Deuce Niven

Gunfire that left a man dead outside a Loris convenience store Thursday was used “in self-defense,” a Loris Police Department press release said.

Information on who died, and who fired, was not yet available Friday morning.

Police responding to the Speedway convenience store and gas station at about 5:30 p.m. Thursday found a “white male approximately 32 years of age lying on the ground with a gunshot wound to the upper torso unresponsive and officers immediately performed CPR until EMS arrived on scene,” the news release said. “EMS transported the unresponsive male to the hospital where he was pronounced dead.”

Witnesses told police that “this incident stemmed from what appeared to be a road rage incident that spilled into the parking lot of the speedway,” the news release said. “It appeared that a truck pulled to the gas pumps with another pickup truck following closely behind.

Loris police continue their investigation, and additional information is expected to be released today, including the identity of the deceased, that information to come from the Horry County Coroner’s Office.

One person is dead following a ‘road rage’ incident that ended in gunfire at the Speedway convenience store and gas station Thursday.

Loris Police Chief Gary Buley confirmed that one person died near the gas pumps at the Speedway just before 5:30 p.m., and that a person was taken into custody at the scene.

A Loris Police Department social media post said detectives believe the shooting may have “stemmed from a road rage incident.

“This was an isolated incident and no danger to the public.”

It was not clear later Thursday evening if next-of-kin notification had been made.

Loris Police Chief Gary Buley said the investigation was ongoing Thursday night, and that additional details will be provided when appropriate.

Gunfire at the Speedway convenience store and gas station Thursday resulted in injuries to one person, police said.

“This is a one person shooting incident,” Lt. Larry Williams of the Loris Police Department said more than an hour after police received the call, at 5:28 p.m. “We are in the beginning stages of the investigation.”

Police tape surrounded access to the gas pumps, where two trucks – one white and one dark colored – were left with the driver door open on one, the passenger door on the other, as police investigated. Two police markers were on the pavement between the two trucks, often used to mark where bullets or shell casings are found.

Witnesses said CPR was performed on one person before an Horry County Fire Rescue ambulance left for a hospital.