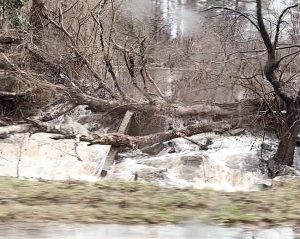 Flood waters escape after a pond in the Holly Hill section of Loris is breached Thursday. (Jenn Causey, TLT)

While there have been no reports of animals lining up two-by-two, nearly incessant rains this week have forced several road closings in Columbus County, caused flooding in Horry that breached a Loris area pond, and has Fair Bluff Mayor Billy Hammond keeping a close eye on the Lumber River there.

“It’s out on Main Street, through the drain pipes,” Hammond said Friday. “At this time, it’s nothing major. We’re expecting it to crest Monday.

A respite from the rain is forecast for the weekend, with moderate rain chances returning Monday and another reprieve through next Friday, National Weather Service forecasts indicated. 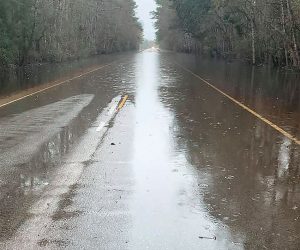 Just east of Columbus County, NC 904 beyond the Waccamaw River in Brunswick County has also closed because of flooding over the roadway, the Brunswick County Sheriff’s Office reported Thursday.

DOT leaders warned motorists not to go around barricades, “which are for your protection.”

A pond in the Holly Hill section of Loris breached Thursday, sending flood waters gushing. Flooding was also seen along low lying access roads at the Waccamaw River between Red Bluff and Conway.

Look for more on this story here as events warrant, and a wrap-up in next week’s Tabor-Loris Tribune in print and online. – Includes reporting by Jenn Causey