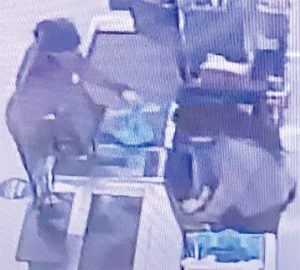 Image from Food Lion surveillance video shows robber, on the left, holding open a grocery bag for cash from the cashier who was shown a gun.

An armed robbery at a grocery store in Tabor City is rare, Capt. Chris Hilburn of the Tabor City Police Department says.

Perhaps more rare is an armed robbery with a female suspect.

That’s what happened at Tabor City’s Food Lion at about 9 p.m. Saturday.

Store personnel identified the robber wearing a red coat and blue bandana as a white woman who pulled a handgun on one of the store’s cashiers, demanding cash, and taking about $800 in cash before apparently leaving on foot towards NC 904, the initial report by Officer Aaron Wilson said.

A small pick-up truck leaving the store at about the same time was located and stopped, police determining that it was not involved the report said. Police recovered a $5 bill in a grassy area between the store and the highway.

A statement from the cashier, and surveillance video, showed that the woman wearing a red coat “and blue headwear” approached the cashier with some groceries, and after at least one item was scanned the robber pulled up her shirt enough to reveal a semi-automatic handgun, telling the cashier “that she did not want to hurt her and put the money in the bag with the merchandise,” the report said.

Noodles were in the bag the cash was placed in, the robber walking away as another customer walked up and began putting items on the conveyer, unaware of what had happened as first the robber, then the cashier walked away.

Capt. Hilburn said police don’t know if the woman had a get-away vehicle waiting, or went to a nearby residence. Though the video is of poor quality, Hilburn said he hopes someone may remember seeing the robber Saturday evening, and will contact Tabor City police.

Look for more on this story as events warrant, and in Wednesday’s Tabor-Loris Tribune in print and online.