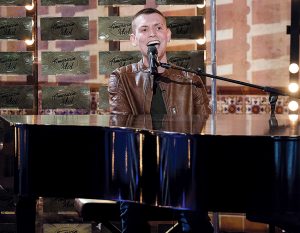 No matter what happens, and he’s contractually prohibited from offering even a hint, Dustin Chapman says earning a spot in this year’s American Idol competition on the ABC television network is a dream come true.

“I was originally supposed to be cast about four years ago,” Dustin said Friday. “I made it to that point, but because it was a re-boot season, American Idol had moved from Fox to ABC, and I was working at Disney World. That meant I was disqualified.”

That proved to be just a detour for Dustin’s burgeoning musical career, one that even his personal, physical challenges have been unable to derail.

He’s been recognized in the country music community for his writing and performing abilities, his audio and video release of “Slow Dance” last summer earning positive attention in both areas.

American Idol presents an opportunity to be seen nationally, and Dustin says he’s grateful for the second chance. 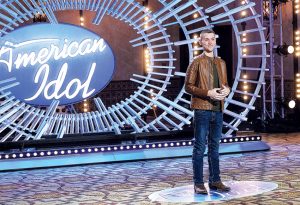 American Idol has its processes, honed during the years since its 2002 debut on Fox, further refined after its two year hiatus when the series revival launched on ABC.

COVID-19 has forced change to those processes, auditions for this season conducted over Zoom last fall.

Dustin said he considered the relative ease of the Zoom audition process, no travelling, no time away from his day job as a school teacher in Columbus County.

“They had an audition specifically for North Carolina,” Dustin said. “That morning, at work, I was asking myself, ‘should I do it?’

“I got home that night, and said ‘I’m just going to give it a try.’ I went to my building, where I have my equipment set up, got on the Zoom, and did it.”

“It” included performing three songs, Dustin’s own “Slow Dance” a Keith Whitley tune, “Don’t Close your Eyes,” finishing up with another original, “Words and Alibis.”

“That’s my next single,” Dustin said.

Though no travelling was involved, the next steps took some time, including a “long questionnaire,” Dustin said, more songs for additional producers, more Zoom interviews. The next big step, a trip to Hollywood and a chance to sing for the celebrity judges, Katy Perry, Lionel Richie, and Luke Bryan.

Ryan Seacrest, the only remaining original cast member, has returned to host the series which airs at 8 p.m. Sundays on ABC.

Another reflection of the ongoing pandemic was the process of getting to Hollywood and performing for the judges. Dustin chose his Mom, Sandy Smith Chapman, to accompany him.

That was in early October, after quarantine, and Dustin admitted to some nervousness.

“I didn’t sleep the night beforehand,” he said. “It’s not that I was scared, more I can’t believe I’m actually going to do this.

“This was probably the most nerve racking thing I’ve done.”

Which is about as much as Dustin can say about his American Idol appearance, at least for now. His contractual agreement prohibits him from talking about what happened on the show until it is broadcast, and that date has not been set, said publicist Lauren Kenyon, Vice President of Superjuice.

Whatever happens on Idol, Dustin, now 23, said he was thrilled with the opportunity the competition offers.

“This year it just really felt right to me,” Dustin said. “I think there’s a plan and a purpose for every season. Things really played out for me.

“It was my first time on the west coast. Very different. There was a lot of down time in the hotel. We were in a show bubble because of the pandemic.

“It was crazy, we were in the Hollywood Walk of Fame area, and looking outside the window we could see people in every kind of costume, people taking pictures of people.

“I felt like I was in my element. Everything felt normal to me.”

Idol competition in 2021, despite the pandemic, came at the right time, Dustin said.

“I’m constantly putting in work to get better and improve,” he said. “Four years ago, I would not have been as prepared.”

Dustin spent no time discussing his ongoing battle with an extremely rare disease called Achalasia, which affects the esophagus and makes swallowing and eating difficult.

“American Idol has been an amazing experience,” Dustin said. “Something I’ve dreamed about as a kid. It’s shown me that I was on the right path.”