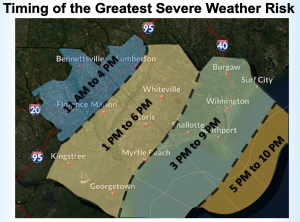 Additional early closings related to a severe weather threat have been announced as the timing window has diminished.

Southeastern Community College will close at 2 p.m., as will Horry County offices, while Columbus County government offices close at 2:30 p.m., all to resume normal hours Friday.

Timing of the most severe threat for the area that includes the Tabor-Loris Community, a swath from Elizabethtown to the Grand Strand, is from 5 to 7 p.m., with rain beginning sooner and extending well into the night.

While no warnings have been issued, threats include winds with “damaging gusts in excess of 60 mph, tornadoes, and some large hail,” a National Weather Service bulletin said.

Lightning and low-level flooding are also risks, the NWS reported.

“Everyone in southeast NC and northeast SC should review their severe weather plan, and be prepared to take shelter if warnings are issued in your area,” the NWS reported.

Look for updates here and a wrap-up in the next Tabor-Loris Tribune in print and online as events warrant.

A threat of severe weather Thursday from a storm front that has already spawned tornadoes in deep south states has prompted changes in public school scheduled in Columbus and Horry counties.

Horry County Schools will revert to all virtual learning Thursday, keeping students off of buses and out of cars with online classes at home.

A strong cold front will drive storms across the Carolinas Thursday, the National Weather Service reported, with the greatest risk for the Tabor-Loris Community likely from 1 to 6 p.m.

No watches or warnings are in effect, the NWS reported, but “widespread, intense, and long-lived severe storms are increasingly likely,” the NWS reported. “Primary threats include damaging winds, strong tornadoes, and large hail.”

Look for updates here and a wrap-up in the next Tabor-Loris Tribune in print and online as events warrant.