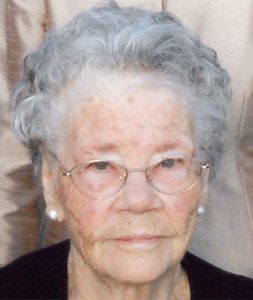 Marble Marie Simmons Dudley of the Beaverdam Community, Chadbourn, died Friday, March 26, in Hock Family Pavilion in Durham. She was 96.

Born Sept. 14, 1924 in Columbus County, she was the daughter of the late Charlie Clarence Simmons and Bertha McPherson Simmons and the widow of George Edward Dudley.

She was a member of Beaverdam Original Free Will Baptist Church.

In addition to her husband and parents, she was preceded in death by a son, Harold Gene Dudley; two grandchildren, Darryl Dudley and Ricky Dudley; and three siblings, Carl Simmons, Paul Simmons and Muriel Dudley.

A graveside service was held at 2 p.m. Sunday, March 28, in McPherson Cemetery.

In lieu of flowers, memorials may be made to Beaverdam Original Free Will Baptist Church Building Fund, 2665 Beaverdam Road, Chadbourn, NC 28431.