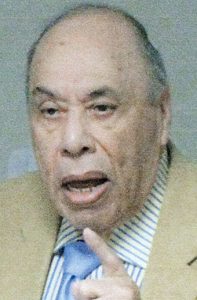 Jose Gabriel Miranda Jr. of Pinehurst went to his heavenly home on April 29 at the age 80 after a long battle with Dementia.

Jose was born Dec. 31, 1940 in Aguadilla, Puerto Rico to Jose and Virginia (Sosa) Miranda. He moved with his family to Fayetteville when he was 14.

Jose was passionate about sharing the good news of Jesus Christ and studying/teaching God’s precious Word. He attended the Cape Fear School of Theology and was ordained into the ministry at Village Drive Baptist Church in 1976.

During Jose’s ministry, he not only was able to share God’s love with those here at home, but also with those in foreign lands. He conducted the Southern Baptist Convention Ministry for Evangelism in North Carolina in 1987 and served as Vice President and President of the NC Southern Baptist Evangelism Association in the Late 1970’s. He was also chairman of the Nicky Cruz Outreach of North Carolina from 1970-1975.

A 1978 trip into Poland to smuggle Bibles and Christian literature behind what was then the Iron Curtain is one of the highlights of Jose’s ministry.

In addition to his love for Christ, he will be remembered for his quick wit, wide grin, compassionate giving spirit, love for family and friends and for being a beloved troublemaker.

Jose was preceded in death by his father and mother. He is survived by his wife, Mary Catherine of the home; his siblings, Raymond Miranda (Barbara), Doris Lugo, and Luz Stuart all of Fayetteville, and Lily Bennett of West Monroe, Louisiana; numerous nieces and nephews; and many disciples he mentored in God’s Holy Word.

Funeral services were planned for 11 a.m. Saturday, May 1, at Boles Funeral Home, 425 West Pennsylvania Avenue, Southern Pines, with visitation to be held during the hour preceding the service.

A graveside service was planned for 3 p.m. at Forest Lawn Cemetery, Tabor City.

Services will be livestreamed on the Boles Funeral Home Facebook page.