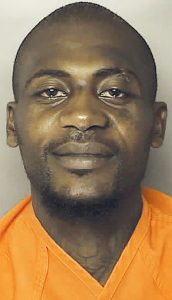 A guilty verdice was returned Friday for a Tabor City area man who shot into a neighbor’s occupied more than two years ago, District Attorney Jon David announced.

Edward Deron Riggins, 31, who lived on Tillman Avenue, Tabor City when the shooting took place on Aug. 16, 2018, was sentenced to serve from 116 to 164 months in state prison – more than 9.5 years to more than 13.5 years, after a jury found him guilty of discharging a firearm into an occupied dwelling and possession of a firearm as a convicted felon.

David said Riggins waited outside the victim’s home “until the victim returned from an evening with friends and began opening fire while he and his wife were inside,” a news release from the prosecutor said.

“Mr. Bellamy fired shots back at Mr. Riggins from inside the residence,” Tatum said in 2018. “Riggins was struck by one of the shots.”

Bellamy was taken into custody at an Horry County hospital, and later returned to Columbus County to face the warrant for shooting into an occupied dwelling.