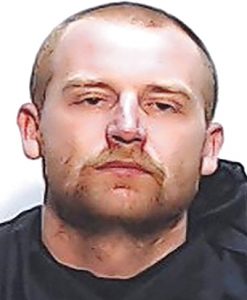 Warrants were served this week in the theft of a dirt bike last September and a handgun last month, Columbus County Sheriff Jody Greene said in a news release.

Tyler Edward Sutton, 25, of Clarendon was taken into custody following a June 7 traffic stop on Horace Cox Road east of Tabor City, the news release said, and served with felony warrants charging him with larceny of a motor vehicle, larceny of a firearm, and breaking and entering a motor vehicle.

Two misdemeanor warrants for failing to appear in court were also served on Sutton, who was held at the Columbus County Detention Center under a $23,000.00 secured bond.

Billy and Shyra Ward reported the theft of a dirt bike from underneath their carport on Roseland Road, south of Chadbourn, on Sept. 28, 2020, the news release said. Surveillance cameras recorded two white males removing the dirt bike and pushing it off the Ward property.

That video was shared on social media, leading to warrants for the men, including Sutton.

Sheriff’s investigators working on an unrelated case in January in the vicinity of West 6th Street in Tabor City discovered a dirt bike abandoned on the side of the road, the vehicle out of gas. They determined that it was the dirt bike stolen from the Ward’s, and returned it.

A gun theft east of Tabor City was reported by Ishmael Torres on May 9, the news release said. Torres told deputies that his Taurus handgun was taken from his vehicle while it was at a home on MM Ray Road.

Sutton was identified as a suspect in that case, and another warrant for his arrest was obtained.

That gun has not been recovered, the news release said.