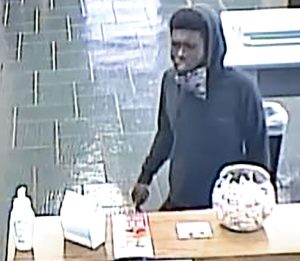 A suspect in Tuesday’s bank robbery in Tabor City was in custody at about 7 p.m., apprehended at a West 3rd Street home where he had been living, Capt. Christopher Hilburn of the Tabor City Police Department said.

Arthur Reid Jennings Jr., 23, will be charged on warrants with robbery with a dangerous weapon, Hilburn said. Investigators were expected to serve a search warrant on Jennings’ home Tuesday evening.

Look for more on this story here as events warrant, and in this week’s Tabor-Loris Tribune in print and online.

Police have some good photos of the man who robbed Tabor City’s First Bank Tuesday morning, and are asking for the public for help in identifying him, Capt. Christopher Hilburn of the Tabor City Police Department said.

Three employees were in the bank branch on East 5th Street when the man entered through the back door shortly after 9 a.m. Tuesday, Hilburn said.

“They never saw the gun,” Hilburn said, “but they could see the outline of it through his pants pocket.” 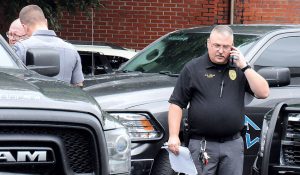 After several minutes the man demanded money, and left through the same back door with an undisclosed amount of cash,” Hilburn said.

“He went in that direction,” Hilburn said, pointing in the direction of East 4th Street, behind the nearby United Bankshares branch and Tabor City Auto Parts, where Mayor Royce Harper said he was when he learned of the robbery. His daughter, Jessica Davis, manages the First Bank branch.

“I got a text that said “We’ve been robbed,” Harper said. “I threw my hands up.”

No one was hurt, but Harper said the employees, including his daughter, were “mighty shook up.”

Hilburn said the department, with the photos, is confident of an arrest, and believe the robbery may be related to the theft earlier in the morning of a BMW from Bertie Road in nearby Horry County.

“We think he may be from South Carolina,” Hilburn said. “Someone knows him. We’re going to blast his picture all over all of the media we can.”

Anyone with information on the robbery, or the man captured in surveillance video, is asked to contact Capt. Hilburn at 910-918-4799 or the Tabor City Police Department.