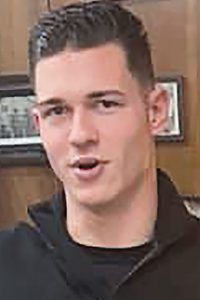 Arriving on a crash scene to find a woman entrapped in her overturned and burning car, Officer Nick Forster of the Tabor City was able to extinguish the both in the engine compartment and passenger area before other first responders arrived, Maj. Russell Conway said.

“He did a great job,” Conway said of the officer’s lifesaving actions. “He sustained some injury, too. People need to know.”

Forster was dispatched to the crash early on the morning of July 7, arriving just before 1 a.m., because the call appeared exceptionally serious and there was no NC State Highway Patrol Trooper nearby, Conway said.

A 1995 Chevrolet was upside in the ditch when Forster arrived, his report said. “The vehicle had flames showing from the engine and passenger compartment.”

After telling dispatchers to have fire and EMS crews “expedite their arrival,” Forster grabbed the fire extinguisher from his patrol vehicle, put out the fire under the hood, then used his baton to break through the car’s rear window and crawl inside, extinguishing flames there, too.

Courtney Lorraine Barnhill, 31, of Clarendon was behind the wheel of the Chevrolet with critical injuries, Forester wrote.

Crews from Roseland Fire Department and Tabor City Emergency Services got Barnhill out of the car and transferred her to Columbus Regional Healthcare.

Almost as an afterthought, Forster’s report included his own injuries, “lacerations to the left forearm.” He was treated for those injuries at Columbus Regional.

(Updated to correct the fire agency response to this call.)

(First reported July 14 in Tabor-Loris Tribune in print and online.)