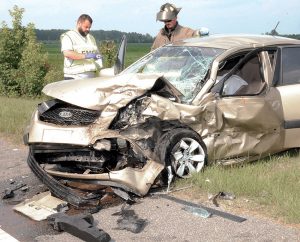 Fire and EMS workers from Tabor City with a Kia where a woman died Friday. (Deuce Niven, TLT)

An investigation by the North Carolina Highway Patrol began after the collision involving a four-door Kia car and a Toyota Solera shortly before 4:30 p.m.

Christy Michelle Henry, 35, of Irvine, Kentucky died on the scene of the crash, Sgt. A.M. Pait of the Highway Patrol said.

Daniel Lee Harris of Whiteville was the driver of the Kia in which Henry died. He was charged with misdemeanor by vehicle, Pait said.

A trooper spoke with the drivers of both vehicles before they were taken to Columbus Regional Healthcare.

Heavy damage to the front of both cars resulted from the collision in front of New Horizon Baptist Worship Center. Pavement markings indicated a no passing zone for both lanes of travel.

Fowler called it a “miracle” that no on in the Toyota was seriously injured, including two women and two small children who were apparently secured in car safety seats. 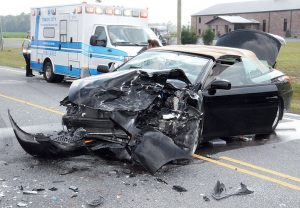 There were apparently no serious injuries among the two women and two young children in this Toyota. (Deuce Niven, TLT)

Multiple fluids escaped both cars, rolling with the slope of the road to a grassy area, where it was difficult to tell how much farther it spread.

Note: This corrects referring to the woman killed in Friday’s crash as the wife of the driver.